CES 2018 – Samsung has announced the new Spin 7, a 13.3-inch convertible notebook that’s easy to use. Featuring a display that rotates 360 degrees, the Spin 7 can function as both a notebook and a tablet.

At 3.4 pounds, the Spin 7 isn’t likely to replace your Apple iPad Air anytime soon. Think of its tablet mode as a convenient bonus. Considering its 43 watt-hour battery, this convertible should have respectable battery life. We’ll expect it to last at least a full workday, if not more. For security, the Spin 7 has support for Windows Hello thanks to its built-in fingerprint reader. Other notable features include a backlit keyboard and a USB-C port. The keyboard is listed as having 1.5mm of travel, which is good by modern notebook PC standards.

Samsung has announced only one model of the Spin 7. Its 13.3-inch display has a 1080p (1,920×1,080-pixel) resolution. The touch display does have active pen support, but the pen is sold separately. Processing power is courtesy of an Intel Core i5 chip and 8GB of RAM. There’s a 256GB solid-state drive (SSD) for storage needs. Windows 10 is standard equipment.

The dimensions of the Spin 7 are 12.4 by 8.5 by 0.73 inches. The latter makes it relatively thin by convertible notebook standards. As we mentioned earlier, though, the 3.4-pound weight of this device precludes it from dedicated tablet duty. That’s been true of nearly all convertible notebooks we’ve tested to date. 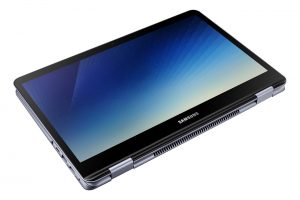 The Spin 7 as a tablet

Samsung has slated the Spin 7 for Q1 2018 availability in the U.S. market, but didn’t announce pricing. We’re expecting this notebook to retail for under $1,000.