Dell plans to launch a new version of the business-use Latitude notebook based on its powerful Inspiron XPS, aiming to boost its sales in the desktop replacement market, according to sources at Taiwanese notebook makers.  Will this new Latitude be aimed at workers that want to play games while on the job?  Well, not exactly.  Dell will treat the new Latitude as a mobile workstation, targeting enterprises that demand notebooks with high performance computing, the sources said.

Dell three weeks ago announced its Inspiron 9100 notebook.  It was a surprise to many, but was greeted well by customers who felt it fit the bill for a good sized and well priced desktop replacement style notebook.  So those that jumped in early to buy the Inspiron 9100 were probably anxious to get ahold of the machine.  But three weeks later most people are reporting major delays on shipments with this notebook.  There’s been no comment from Dell on this issue other than “we’re sorry” type emails to customers that have purchased.  There’s nothing worse than waiting 2 weeks for a notebook you really want or need, except for maybe waiting an indefinite period of time for something you really want or need.  We wish Dell would be honest and tell us what the problem is and how long it’s really going to take to get the notebook.  My order has already been pushed back to April 20 from an estimated ship date of March 26.

Taiwan s notebook makers, including Asustek Computer and Elitegroup Computer Systems (ECS), have started marketing low-cost Linux-based notebooks in the US market, according to sources at the Taiwanese makers.

Asustek is marketing the A2000H Linux-based notebooks. The model runs on Intel Pentium 4 2.6GHz processor with a 533MHz front-side bus (FSB) and is equipped with a 15-inch active matrix TFT XGA/SXGA+ display.

“We’ve done some work with Linux in the desktop space before so for me this is a not a really big thing to do with Microsoft,” Fink said.

The Sharp Actius MM20 is the first notebook released to run on the new one-gigahertz Transmeta Efficeon TM8600 processor, the NY Times is the first place I’ve seen a review for this little laptop: 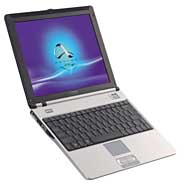 “Everything is relative: nine hours may seem ordinary for a workday, but when it comes to a laptop battery, nine hours is a wonder to behold. The Actius MM20 notebook computer from Sharp can run for three hours on its own battery power, but an optional high-capacity battery can triple the time it stays up and running.”