The Sony VAIO FS Series Intel Sonoma based notebook and updated Sony VAIO A series, the VAIO A690, are now both available from SonyStyle.com.  The Sony VAIO A series is a 17-inch screen multimedia/desktop replacement style notebook.  The VAIO FS is a basic 15.4-inch screen notebook that is somewhat portable and competes with such notebooks as the Toshiba Satellite M45 and Dell Inspiron 6000.

Sony also released a revision of their popular Sony VAIO S laptop, the VAIO VGN-S360, but we’re disappointed to see this is not an Intel Sonoma notebook.  However, if you live in Japan or are willing to order a notebook from the land of the rising sun, the get the VAIO S92 HighSpec, the Sonoma based version of the S series notebook.  The VAIO S92 has includes a nVidia GeForce 2 Go 6200 graphics card

Want a VAIO S with the latest Intel Pentium M?  Only in Japan can you get this

Visit the SonyStyle Japan website to see more, good luck reading it though! 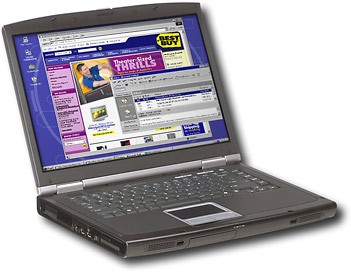 The Gateway 7422GX AMD 64 laptop was recently released and announced by Gateway and is available in such stores as BestBuy.com

Gateway this week announced five new notebooks (none of which have the Intel Sonoma processor) that are available from retailers such as BestBuy.com or J&R.com.  These notebooks have been available in stores for sometime, but Gateway decided to make their press release about them this week.  Remember, you can’t get these specific notebooks from Gateway.com, you have to visit your local electronics store or other online retailers that carry Gateway notebooks  Here’s a rundown of each of these new notebooks from the cow loving company:

A NotebookReview.com member has submitted a review in our forums for the Gateway 7422GX notebook

The HP nc8230 that’s replacing the nc8000 series has gone widescreen, so chalk up another 4:3 aspect ratio screen notebook as biting the dust.  Widescreen is taking over the consumer market these days, and now it’s pushing into the business notebook market!  Here are some hi-resolution pics of the HP nc8230:

Last week AnandTech.com gave a nice rundown of the new Pentium M chips being worked on by Intel.  The next group of processors from Intel will be dual core, the codename for them is “Yonah”.  If all goes well, the dual core processors should be released in January of 2006.  Before that time we’ll see faster single core processors, up to 2.26GHz clockspeed, based on the current Sonoma platform.