$100 Laptop for the Good of the World

Nicholas Negroponte is the founder of the renowned Media Lab at the Massachusetts Institude of Technology.  He’s a smart man.  But last week he showed up to a world conference in Davos Switzerland and announced he wants to produce and distribute a $100 laptop — so is this guy genius gone crazy? 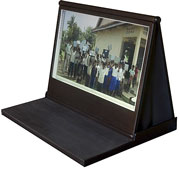 But give the man a chance, here’s what he has in mind.  Negroponte says that half the cost of today’s laptops is in the display screens, so for a $100 laptop it would have to use a far-cheaper technology that works like a miniature rear-projector TV. It’s not elegant, but it would do the job.  He would also plan to run the laptop on a Linux-based operating system, which would be free,  instead of Microsoft’s Windows.  For memory the machine would use 1 gigabyte of solid-state memory to store software and data, “We’re thinking maybe you won’t need a hard disk drive,” he says.  And instead of expensive batteries, the $100 laptop could come with less-capable batteries and a hand crank for juicing them back up.

Now, this laptop isn’t one you’d rush out to stores and buy in the U.S. or other developed countries.  Rather, the vision is that it could make computing and the internet accessible to poorer countries around the world.

Google has already signed up as a backer, presumably dreaming of a few billion more people Googling prospective mates or finding the nearest butcher. Another backer is chipmaker AMD, whose CEO, Hector Ruiz, has been vocal about the need for inexpensive computers for poorer populations.

Hewlett Packard’s Carly Fiorina has “stepped down” from her position as chairman and CEO of the company, apparently following disagreements with the board of directors over implementation of HP’s strategy.  At the CEO level for a company such as HP the term “fired” isn’t used, but that’s essentially what this equates to when a board of directors tell you to get out by tomorrow and don’t let the door hit you on the way out.  From Fiorina’s statement:

“While I regret the board and I have differences about how to execute HP’s strategy, I respect their decision. HP is a great company and I wish all the people of HP much success in the future.”

(I assume she’s not including in that the 17,000 people that she terminated during her tenure.)

Company CFO Robert P. Wayman was named as interim chief executive. Patricia C. Dunn, a director, was chosen as chairman. As of this writing, HPQ stock had risen $1.12, or about 5.56%, on the day’s trading.

How about some good HP news?  Well, they are trying hard in the Tablet PC arena, which is more than IBM or Dell can say, neither of which are trying at all right now.  HP will release the TC4200 soon and will be the first Sonoma based Tablet PC offering.  CNET has a first look at the new HP TC4200:

Below are a couple of hi-res pictures we’ve obtained:

Our sister site TabletPCReviewSpot.com will be publishing some more detailed pics of this Tablet PC soon!