The NotebookReview forum is the best place to go to interact directly with other readers, ask questions, and find answers to specific questions concerning notebook and notebook accessory tech. Here’s a roundup of the latest trending topics and buying advice.

And if you haven’t already, considering signing up. You’ll find no better and welcoming collection of knowledgeable members and moderators. 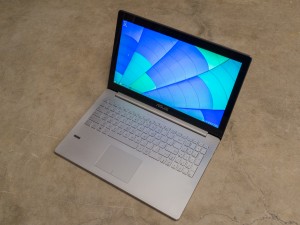 Lousy screen resolution, poor RAM, and low battery life are a bad combo for photo editing and 2D graphics. And this brought one user in search of a new laptop in the $2k threshold capable of handling the load. Users recommended the Dell XPS 15 or Asus Zenbook UX501 to best handle the required horsepower for programs like Premiere Pro and Photoshop. Recommendations from users with experience suggest a laptop with a dedicated GPU for graphics rendering and a screen with at least FHD, or better yet, QHD resolution for color accuracy.

Lightest/smallest laptop with core i7?

Spatial considerations and the desire for a work quad-core laptop capable of handling powerful after-hours gaming (connectible with a Razer Core external GPU) is at the core of this request. Speculation abounded over the Razer Core’s compatibility with anything other than a Razer Blade, a fact that could severely limit options. But some reports suggest that it may be compatible with the Dell XPS 15.

This question stoked plentiful discussion about the differences between the guts and sturdiness of business-class laptops in comparison with consumer-geared laptops. Consensus has it that business-class use similar underlying hardware, with an added number of expansion ports, as well as better graphics, extended longevity, and beefed-up durability (which in turn makes them heftier to lug around).

“Lower core clock, lower memory clock and less cores. Where’s the unlike button?” wrote user Dufus, summarizing the opinions of many over the revealed specs of the Clevo P775DM2-G gaming laptop, which features a NVIDIA GeForce GTX 1080 GPU.

“I’d be ok with this to a degree if they weren’t trying to charge more,” wrote another user.

Process Lasso – Is it worth it?

Process Lasso is a Windows-based process priority optimizer with a GUI for task optimization and automation. When one user posed the question “will it benefit me?” most replied in the negative. Power users called such software pointless, considering most have already manually optimized performance on their own. Others said it was a useful tool to gauge resource usage for low CPU systems.

Using next MacBook Pro primarily as a Windows machine?

The question of compatibility between upcoming quad-core-powered MacBook Pros with Windows OS and external GPUs was posed. One user warned that MacBooks lack adequate cooling and driver support to be used as Windows-only or gaming-only machines.

How can I fix my fps?

Getting more frames per second (fps) in gaming is important for a more immersive experience. One user raised the question of how to increase fps on their MSI GE60 Apache after experiencing a drop in fps and unusually high running temperatures. Repasting was suggested, as was cleaning out potentially clogged vents.

An odd, rapid ticking sound on a new Razer Blade 14 was reported by one user seeking possible solutions. Some suggested underside pressure could cause the bottom casing to press against the operating fan. Another user with a similar experience suggested the possibility of something as simple as a loose screw in the fan casing. According to other reports, the Razer Blade ticking fan syndrome is a noted device flaw.

The Wacom Cintiq 21UX DTK-2100 boasts advanced pen technology, but one user indicated that on trial usage they found the glass display to be significantly more solid than expected—leading to the question: does the Cintiq 22HD offer a more natural experience? Feedback from other users indicated that their experience comparing the 21UX and 22HD was similar, but that using the right pen (in this case, the K-series pen) is strongly recommended for optimal accuracy.

Stepping up from an aging Acer W700 i3, user Mucchan took to the NBR forums to find out which 2-in-1 laptop – the HP Spectre x2, or the Dell Latitude 12 7000 – would best be suited to meet the demands of work and light gaming. User XJ12 recommended the Elite x2 over the Spectre, specifically for the inclusion of Thunderbolt 3, however this comes at an added cost of $500. Yet another recommendation was floated, this one including having a look at the Lenovo Ideapad Miix 700 M5 with 8GB of RAM and 128GB SATA III SSD.